On International Women’s Day this year, the Globe and Mail ran a piece by the author and entrepreneur Emma Knight in which she argued that “it is possible to be considered a well-educated, well-adjusted adult male without ever (or while hardly ever) having read a book written by a woman.” Her prescription was “annually, on the occasion of International Women’s Day, let’s all buy a book by someone who identifies as female, and then read it. How better to celebrate women than by listening to what they have to say?”

It is possible to be considered a well-educated, well-adjusted adult male without ever (or while hardly ever) having read a book written by a woman.

I have to admit, I didn’t buy a book by a woman on International Women’s Day this year, but I was finishing reading one (“Land-Water-Sky / Ndè-Tı-Yat’a” by Dene author Katłıà) and about to start another (“Outlawed” by Anna North).

Interestingly, Ms. Knight’s comments were something I realized about my own reading a few years ago. I like to think of myself as broad-minded and an avid reader. As an exercise, I made a list of the authors I’d read in the last year. The books spanned the political gamut, but I realized that something like 8 out of 10 were men and over half were middle age or older, straight, white, and from North America or Europe.

Clearly ignoring the life stories and voices of women and racialized authors misses out on a lot. Thinking about that, it got to the heart of the question “why does one read books in the first place?” For me it is to better understand where people are coming from, what they and their families went through to get there, and how their background and situation causes them to experience the world differently than I do.

A year of reading differently

So I set myself a goal for a year: that at least half the books I read would be written by women. I started with some obvious books and classics that came up in conversations all the time including:

If you’ve read any of these books you don’t need me to tell you, they are all great.

So many more to discover

A year passed, I achieved my goal, coming in with around two thirds of the books I read that year written by women. By that time I’d compiled a long list of other books I’d missed, so I’ve kept going with it.

Here are a few of my recent favourites:

Isabel Wilkerson’s “The Warmth of Other Suns” about the Great Migration in the US and the parallels between the Black American experience and the immigrant experience is exceptional. Her book “Caste”, which got a lot of attention in 2020 and was one of Oprah’s Book Club selections, is also very worthwhile. 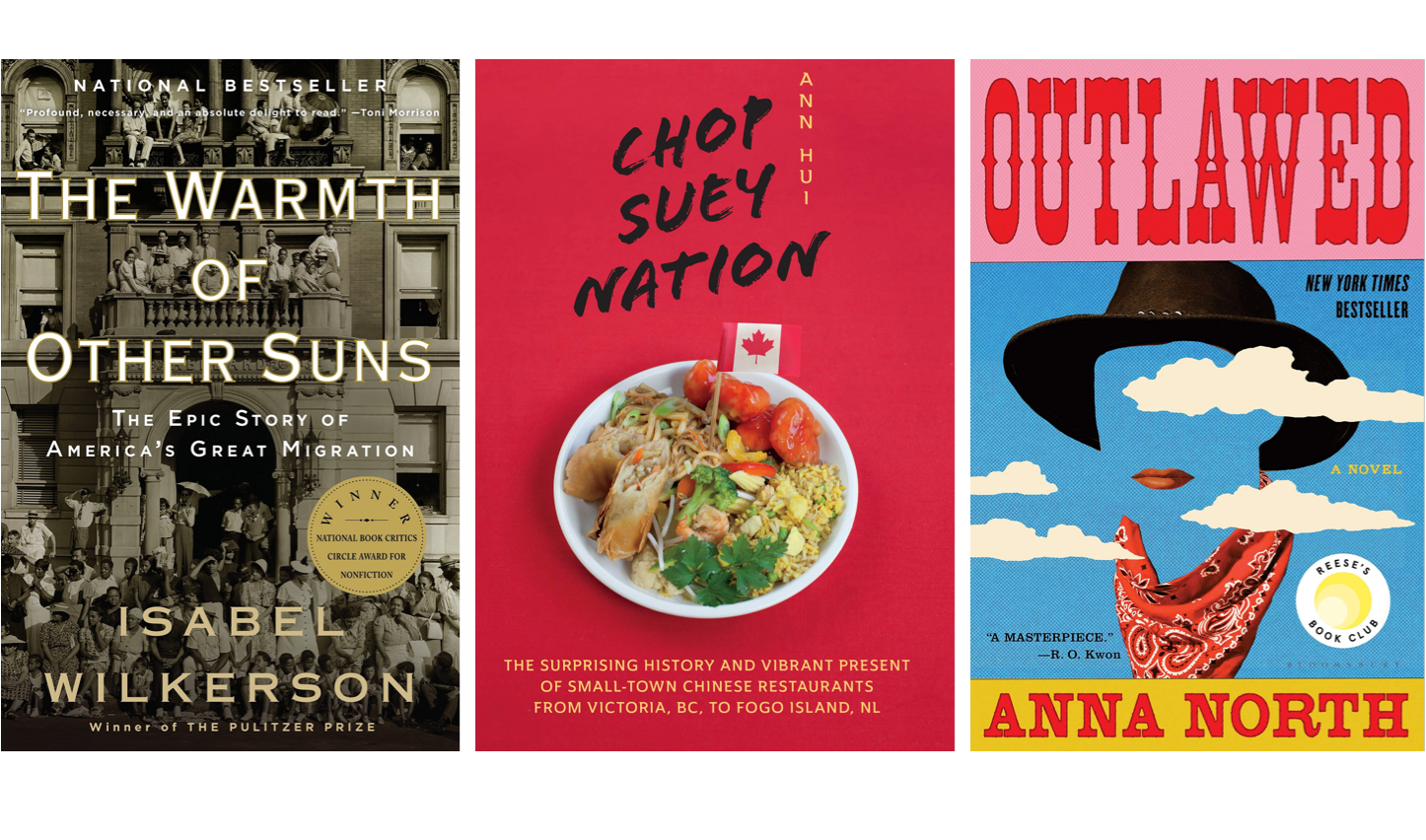 Ann Hui, who writes for the Globe and Mail, wrote the wonderful “Chop Suey Nation” a couple of years ago. It is the story of her travelling across Canada from Victoria to Fogo Island, talking to families that run the little Chinese restaurants that you find in small towns all across the country. At the same time, she explores her family’s experience immigrating and getting settled in Canada. I love this book and recommend it every chance I get.

“Outlawed” by Anna North is a recent feminist Western that I really enjoyed. The narrator is a young newlywed who has difficulty bearing children. Once rumours spread in town that she might be a witch, she sets off to join a gang of female outlaws who’ve also been marginalized by society. It is a good read and made me want to learn more about what was understood about reproduction and fertility 130 years ago, both scientifically and in popular beliefs.

Going through this exercise made me realize there were whole swaths of great books that I’d disregarded because I didn’t think they were “for me.” Sometimes that was because they weren’t marketing to men, other times because the reviews I’d read clearly emphasized the book’s resonance with female readers, and sometimes for no good reason. I felt dumb for having overlooked so many fantastic authors, having focused on what in retrospect seems like such a narrow range of life stories.

Going through this exercise made me realize there were whole swaths of great books that I’d disregarded because I didn’t think they were “for me.”

Any one of the books I mention is a good place to start for increasing your female authors but there are literally tens of thousands of others. I’m only just scratching the surface, trying to get caught up. In the meantime, do what you can to listen to and promote and support — not take credit for — the ideas and voices of female authors and thinkers, in public, in your own office, and in your life.

I’ve since expanded the practice to my Twitter feed to make sure that I am hearing the voices and opinions of women and folks from different backgrounds than mine every single day.

I’ll close by recommending this exercise to everyone. Check your bias in your authors, twitter feeds, podcasts and all of your media. Do it selfishly because there are so many great stories and ideas you are missing out on, and unselfishly because it is the right thing to do.