It was an incredibly jam-packed weekend for Drupallers here in the Pacific Northwest, with the 2nd annual PNW Drupal Summit in Vancouver. The Summit is a weekend conference that is targeted towards people already working with Drupal (moderate to advanced level), and is done in a regional mini-DrupalCon style: pre-scheduled sessions/tracks, keynotes from Drupal 7 maintainer Angie Byron (aka. webchick) and Chapter 3's Josh Koenig (aka. joshk), and Drupal 7 code sprints (that resulted in bringing the Drupal 7 criticals count from 13 to 8 over the course of the weekend, HOOAH!)

We had 240 people altogether for 2 and a half days of awesome Drupal geekery. In addition to all of the attendees from BC, Washington, and Oregon, we had Drupalfriends from Idaho, Montana, Nebraska, Colorado, California, and Minnesota travel here to come join us in the fun!

The Affinity Bridge team was out in full force, presenting 5 sessions and one BOF over the course of the weekend, and co-organizing Friday's Drupal 7 code sprint, which was kindly hosted by our friends and neighbours at The Jibe. All of the sessions we presented were focused on sharing knowledge about some of the cutting edge technology and methods we've been using, and also about business/management/development practices specific to Drupal.

Shawn Price spoke on Simple Continuous Integration with git and CI Joe, demoing some of the tools and practices he's been using to set up continuous integration for one of our recent projects. Shawn continues to push the envelope for automated integration and testing at Affinity Bridge, and has been laying the groundwork for implementing these sorts of practices more broadly for our other projects.

Mack Hardy talked about keeping Everything in Code! The importance of storing configuration in code (and, of course, in version control), and how it helps make deployment a much smoother process. He did an extensive review of using .make files, best practices for pushing changes between development/staging/production environments, and how to set up all the various tools needed for this. (Zoë helped prepare the fantastic slides for this, but was hit with the flu and wasn't able to co-present as planned.) Over the last year, we've become fairly religious about these processes, so it was great to be able to share them.

Tylor Sherman's session was on Open Data and Beautiful Maps. He demoed how to set up a map from open data using Gmap and Views in under 10 minutes (I believe he clocked in at under 7 minutes on this), and then showed some of the more advanced tools (OpenLayers and MapBox) you can use to theme and customize maps. Tylor has been doing really cool things through his Drupal open data and mapping research, and actually had a map he built for fun used by the City of Vancouver prior to them building their own.

Robin Puga, our team's Aegir expert, talked about how to use Aegir and Drush - Harder, Better, Faster, Stronger to make your development life easier. He reviewed the improvements that have been made in Aegir over the last year, especially the migration and multi-server management tools, and how with the help of Drush you can easily and quickly manage and migrate sites.

Finally, Mack and myself rounded it all out with a session on Doing Business in an Open Source Ecosystem, and a BOF (birds of a feather) session on Agile Development and Project Management. In the business and open source session, we talked a lot about how working with Drupal can and should differ from working with proprietary software. Notable highlights include: the opportunities that working with and contributing to the Drupal project can afford you, why contributing should be a part of your workflow, how to incorporate/educate your clients on open source (which led to interesting discussions about the GPL and licensing), impacts on corporate culture, and personal benefits. In the Agile BOF, we mainly discussed some of the challenges in sticking to Agile methodologies, how to make it work with clients, and some of the nuances of team dynamics and development processes. 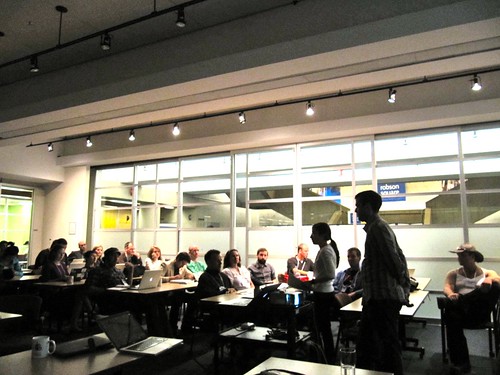 Keep an eye on the AB blog for more detailed posts from everyone with notes from their talks, links to slides etc., and I'll be sure to update this with links to the video from Tylor, Mack, and Robin's sessions when it's up. This was most of our first times presenting on these topics (especially to such a large audience) so we'd love any feedback you have on the sessions (feel free to post in comments or send in via the contact page).

All in all, an extremely fun and fascinating weekend! Everyone's photos can be viewed on Flickr #pnwds. Thanks so much to the other organizers and sponsors, as well as everyone who travelled near and far to attend. It was a huge team effort, and turn out even better than I think any of us had hoped! See you all next year (or in Chicago)!