According to the 2015 Vancouver Immigrant Survey, 1 in 3 newcomers remain unaware of the services and resources available to them. With 153,000 newcomers living in Metro Vancouver, this means thousands of people don’t have access to the essential information they need about health care, housing, money, employment, transportation and more. While there are a lot of social services dedicated to newcomers, there has been no central repository for this information. Until now.

Confirmation of success from our end users

The challenge: help newcomers connect to the information they need

To help improve the newcomer experience, PeaceGeeks partnered with us to create a free mobile app to help refugees and immigrants in British Columbia find information and services to plan their settlement journey. PeaceGeeks is a nonprofit organization that builds digital tools to empower communities in the pursuit of peace.

We’ve been long-standing partners with PeaceGeeks, helping them connect refugees to services in places like Jordan and Syria. We were thrilled to continue collaborating with them on building an app to help refugees and newcomers in our home province. 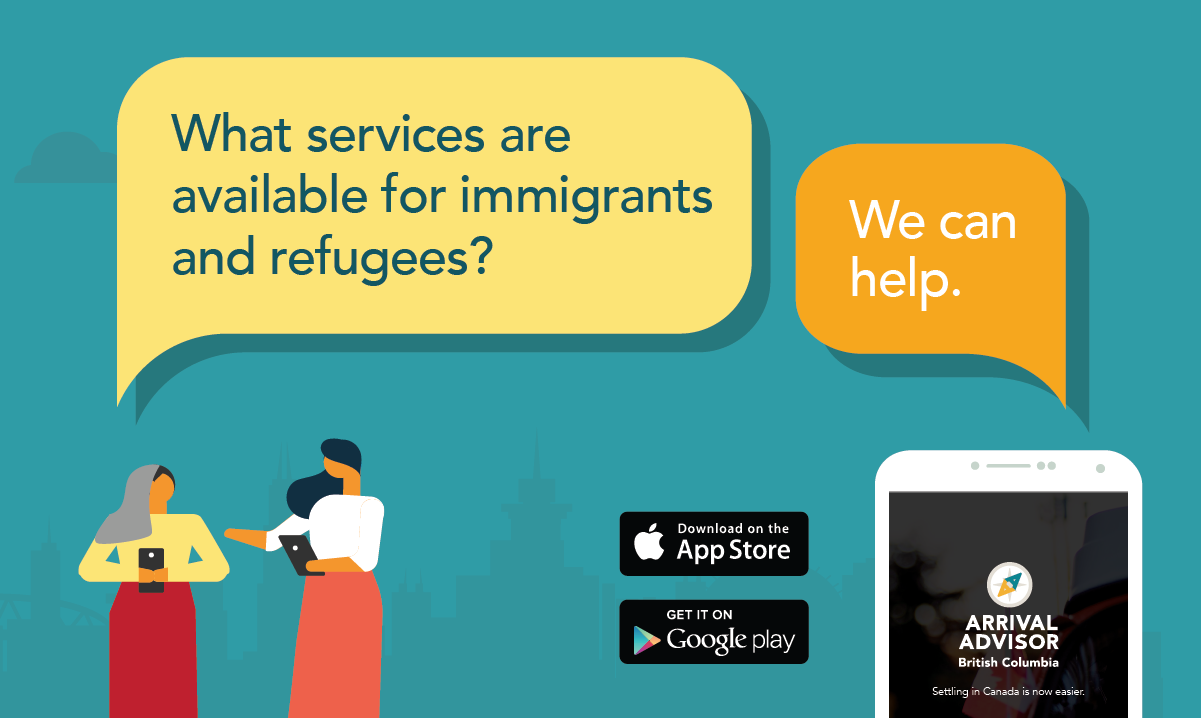 "Affinity Bridge has been an invaluable partner of PeaceGeeks since 2013, helping PeaceGeeks to develop our first app, Services Advisor for refugees in Jordan and Turkey, and more recently for leveraging that experience in supporting the launch of the Arrival Advisor app." 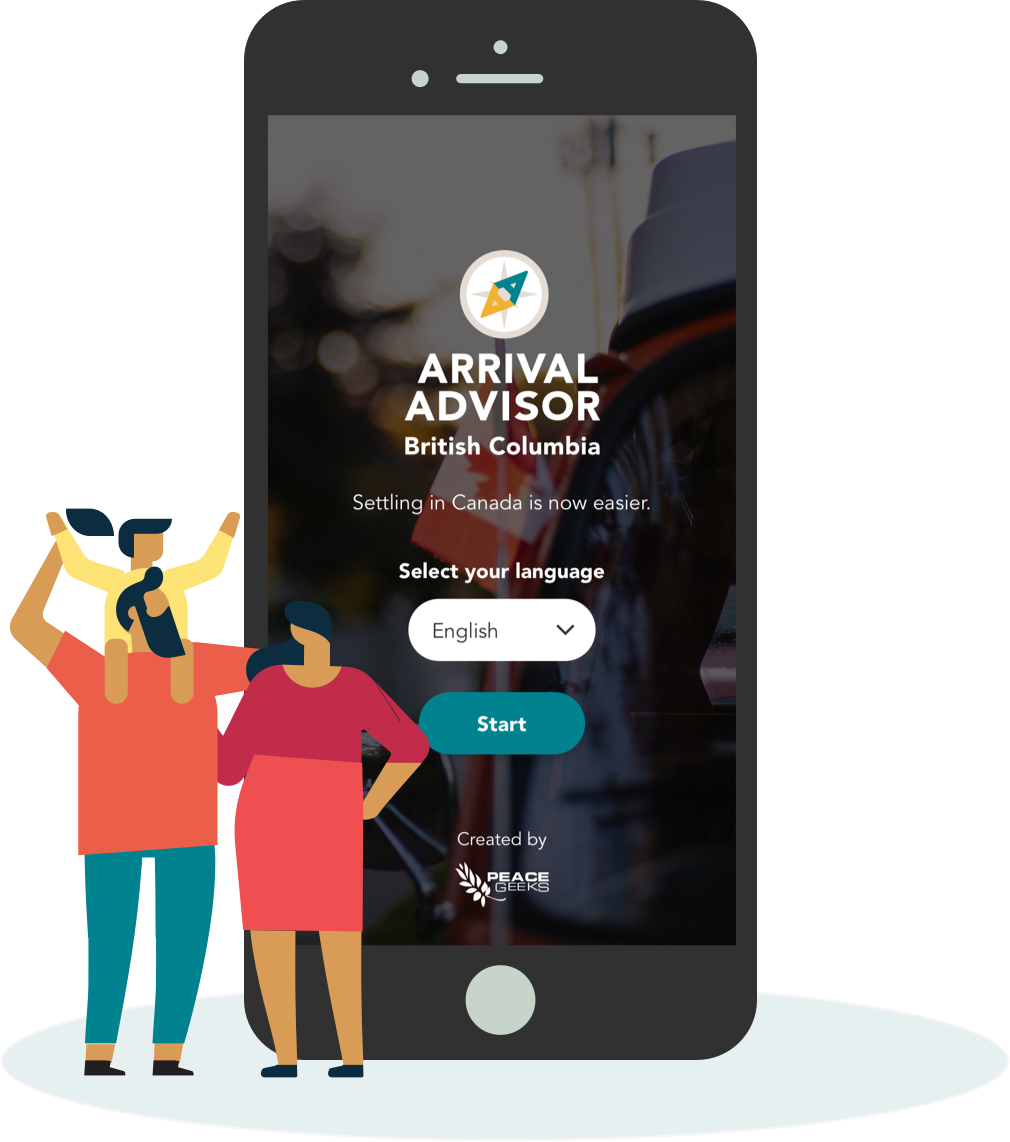 When PeaceGeeks first approached us about the project, our CEO Mack Hardy played a pivotal role in helping to develop and expand the vision for the project. Mack supported the application process for the Google.org Impact Challenge. This ultimately led to PeaceGeeks placing in the top 5 of 900 Canadian non-profit organizations, and winning $750,000 towards launching the project.

With funding secured, PeaceGeeks turned to Affinity Bridge to support the project’s resourcing, intricate technical components, and coordination. This meant PeaceGeeks was able to build internal capacity and create a broader technical team. Together, we navigated the complexity of building a robust mobile app with a variety of stakeholders and data inputs.

Working closely with the Newcomer Committee, Affinity Bridge and PeaceGeeks began a deep discovery phase aimed at understanding the different needs and experiences immigrants and refugees face when they arrive in BC. Hearing from newcomers directly helped shape the early designs.

With a large pool of people who could validate that we were on the right track—from the invaluable newcomer committee to the frontline worker and technical committees—the process was truly collaborative. We drew on these stakeholders throughout UA testing, UX design and development.

Working with the Newcomer Committee to test the design at different stages was enlightening. At the start we didn’t know for sure what we needed - taking an agile approach and hearing from our target users were key to finding the right solution.

“It was eye-opening to hear how diverse the newcomer experience is and how accessible this app really needed to be to fit people’s different needs and technical abilities,” says Robin Puga, Affinity Bridge’s Chief Technology Officer. “We had to refine our initial vision to ensure the app was clear, approachable and easy to use.”

Our team took an agile approach, building incrementally and testing as we went. The goal was to build the bare minimum, test it, then continue to flesh out the app with more features. We also facilitated naming workshops with stakeholders, landing on a clear and direct name: Arrival Advisor.

“Working with the Newcomer Committee to test the design at different stages was enlightening,” says Robin. “At the start, we didn’t know for sure what we needed - taking an agile approach and hearing from our target users were key to finding the right solution.” 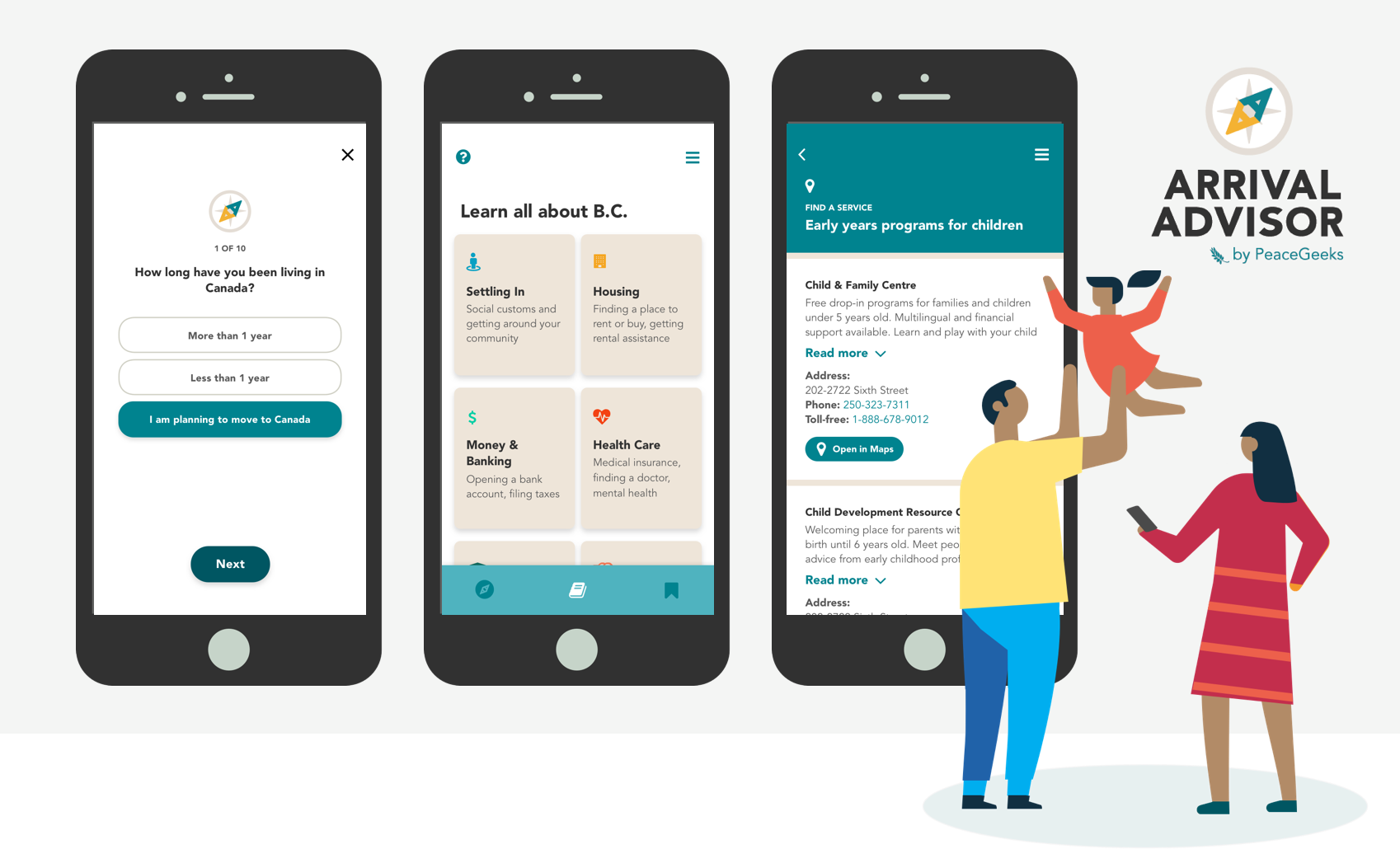 The technical vision for this app is to create accessible, open source technology so others can replicate it and help more newcomers successfully settle into their new homes anywhere in the world.

When it came to the build, we chose Django for the server-side application because it is a robust, scalable web framework written in Python. We also chose React Native as the javascript framework when we built the mobile app because it works for both Android and iOS.

The end result is an approachable, beautiful and easy to use app that connects newcomers to BC with essential settlement information. But don’t take our word for it - ask one of the hundreds of people who downloaded it before it’s official launch, calling it both helpful and much needed.

Arrival Advisor is set to officially launch at the end of March but this is just the beginning. Together with PeaceGeeks, we are building a foundation on which we can make the newcomer experience easier as time goes on. From developing a mentor matching program to collecting feedback, we will continue to work with PeaceGeeks to make the Arrival Advisor app a valuable tool for newcomers.

Arrival Advisor in the media